The vertical card is the Owego High School Graduating Class. It certainly looks fun... and a little bit dangerous!


Check out this rare old embossed pharmacy bottle. Dating to the period from ca 1890 to1903, this fancy custom bottle was from druggist J. R. Spencer of Newport, ME. (See the listing here.)

This antique embossed cork-top bottle is faintly marked on the bottom “S B W CO” (from the Saltsburg Bottle Works Company of Pa).

J R Spencer was a leading druggist in Newport, Maine at the beginning of the 1900's. (There was at least one other pharmacist in Newport at that time. More information is here.)

J.R. Spencer's Druggist was a prolific user of advertising. His claims in 1901:

By 1902, his claims were more outrageous:

"Spencer’s Headache Powders.The only one that cures with no bad effects which contains no opiates. J. R. Spencer, Prescription Druggist, 14 Mill St. Newport, Me."

"TAKE Spencer’s Vegetable Blood Purifier for that Tired Feeling Rheumatism, Kidney Diseases, and all diseases arising from an imperfect state of the blood."
In 1902, the business traded places with the barber shop and moved across the street. By 1904, a stationer's business was added.

After that, the online curtain draws closed on Mr. Spencer.

Which type of Sauer's extract bottle is this?


This estate auction find is listed on Etsy. It looks to be from circa the 1920's. The side seams go up to the lip. It is marked on the bottom with "AGW 5."

American Glass Works began in 1908. This big glass company was owned by none other than C.F. Sauer, the proprietor of the extract company... Check out the details available about the many Sauer's bottle types! They evidently used older/cheaper methods to make their own bottles, including this one.

Some had a packer finish, and a ring finish,

This bottle measures nearly 6" tall. It has a sunken back panel. The closest is Type IV. But this type should not have a number with the initials on the bottom. And this one has what looks like an oval on the bottom, which is not supposed to be there either...

So you be the judge. There are plenty of fins including the side seams (it seems to me at least). 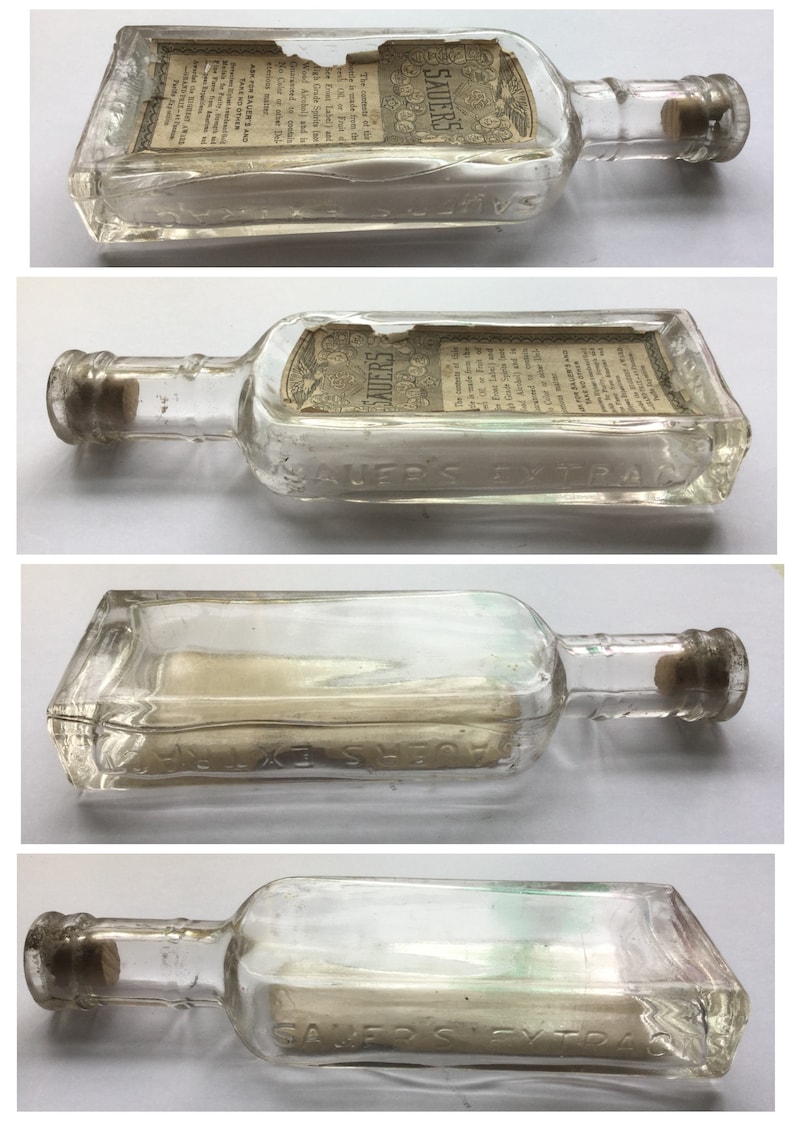 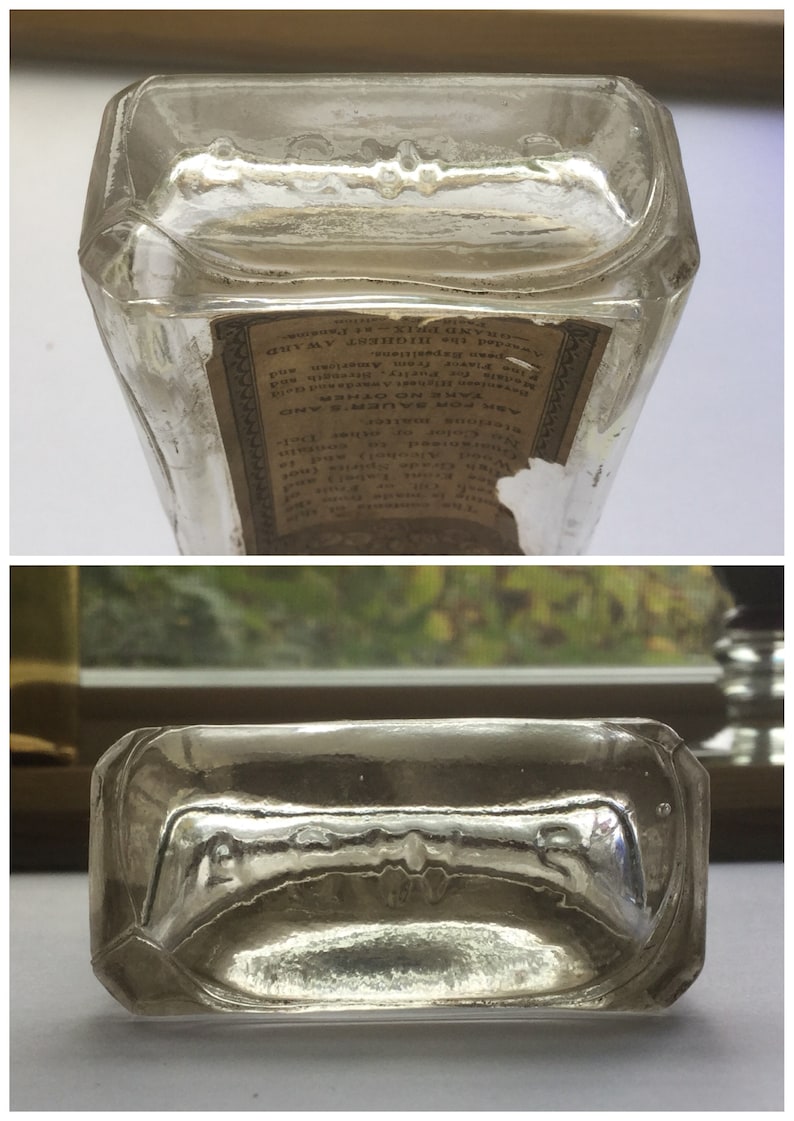 Steamship Camden at Belfast Maine Wharf in the 1920s

Last year, I purchased this photo of the wharf at Belfast, Maine. Moored is the SS Camden. Really this is a large cabinet card. Although cabinet cards are said to have gone out of use by WW2, this is dated in the 1920's.


The Camden was built in 1907 at Bath Iron Works for the Eastern Steamship Lines. “The new, steel turbine steamer Camden made her first trip on Saturday, June 22nd, arriving in Camden at 6 a.m. She had made a record-breaking run from Boston to Rockland in 8 ½ hours. A crowd of over 600 people were on hand to greet the ship, with the Camden Band providing music for the occasion." (Her twin, the Belfast, also built at Bath, was launched two years later.)

In that era, Belfast was a hub for steamer traffic. The steamship wharf was a busy place, with boats carrying passengers to bayside towns, as well as summer excursions and fishing grounds. By the 1930s bridges carried vehicles across rivers and the era of steamboats was coming to an end... (The Eastern steamship wharf housed a roller skating rink before being torn down.)

The Camden made the overnight run between Boston and Bangor. In 1936, the steamship was sold to the Colonial Line and renamed the Comet. and ran between NYC and Providence, RI. During WWII it was used as a troop transport in Hawaii; in 1948, the ship was towed to Asia for service on the Yangtze and was broken up shortly after that in Hong Kong.


On the frame backing is named the captain, Charles Crockett [misspelled] of Winterport Maine. And the Quartermaster was William G White. (My guess is that this came down from the Quartermaster's estate but I could of course be wrong.)

There are markings on two parts, and the dates are different (five years apart). On the frame backing is named the captain, Charles Crockett [misspelled] of Winterport Maine. And the Quartermaster was William G White. (My guess is that this came down from the Quartermaster's estate but I could of course be wrong.)

It is available in my Etsy shop here.

Ah well, there are sometimes mysteries that must be left unsolved. I hope you have enjoyed this journey!

Posted by Joanne at 2:21 PM No comments:

From pharmacist to governor of Maine

Sometimes the vintage paper of interest is attached to a bottle. Antique labels on bottles contain a wealth of information. Here is one such example: it is a bottle of bay rum, alcohol 58 per cent by "Barrows & Barrows, Registered Druggists, the Rexall Store, Maine Street, Newport, Maine."

George M. Barrows was born in Hampton Maine in 1863. His background growing up was in the “wholesale potato business.” He studied at the Massachusetts College of pharmacy. Then he became a partner with another pharmacist in Brunswick, Maine.

In 1892, Mr. Barrow was married to Theo L. Jose. The following year he started his own retail drug business in Newport, Maine. That year his wife also gave birth to a son...

Lewis Orrin Barrows also graduated from pharmacy school. He joined his father as partner in 1917 and the business became “Barrows and Barrows.” Lewis served in various Newport town capacities and on the board of Newport Trust... Lewis eventually became the 57th governor of Maine, serving from 1937-1941. (Although Gov. Barrows moved to Massachusetts after serving as governor, Barrows & Barrows Rexall Drugs was still in Newport as of the late 1950's.)

The bottle itself is another mystery. It has a crescent moon maker's mark. This mark is occasionally seen on the bases of pharmaceutical and/or prescription bottles of northern New England and New Brunswick (just over the border in Canada).

You can see that the bottle mold had a crack in it, too...

In the late 1800's, few people could afford insurance. There was no social security, inexpensive life or other governmental programs in the United States. Fraternal orders began to provide for the insurance needs of their members. This could even include members of different groups such as unions, professional societies, and investment associations.


How it went was, each person in the group paid a certain amount to become an insured member. Whenever a member died, each of the remaining members would be assessed (in this case, $2.50). Most of the monies would be paid to the deceased's beneficiary. A small  amount was retained to defray operating expenses.

Most of the expenses were incurred through the purchase of specially printed United States Postal Cards (seen here). They were used to notify members of assessment.

130 years ago, members of the Mechanic Falls, Maine Masons were assessed due to payouts for four deceased members. Those members are named on the card, as well as their age and cause of death -! (It was a bad year to be 49 years old... those men would have likely served in the Civil War... pneumonia was a common way to go...)

This postal card is Jefferson Facing Right, "Nothing but the Address to be on this Side." Is was postmarked April 1, 1890, less than a month after two of the men died... pretty quick.

Some information about the men who passed away:

William G COX
Sept 2, 1866, Mr. Cox of Searsmont married Abbie H. Bean
Jan. 27, 1890 William G., 49, son of the late Israel Cox, and proprietor of the Windsor Hotel.
(On Jan. 2 of that same year his father Israel Cox, 86 died. He was a native of Lincolnville, and Sheriff of Waldo County in 1841. For nearly thirty years, in connection with Bohan Prentice Field, he conducted a large insurance business.)
Cause of death for William was pneumonia, age: 49

Samuel Benjamin WASHBURN
Born 1824, died March 4,1890 Age 66
Cause of death: "wounds received in USN"
"The only seafaring son [in his family], Samuel shipped out at age 18 and later became the master of his own vessel. During the Civil War, Samuel was Acting Master in the U.S. Navy and became an officer on the gunboat Galena. During battle, he was wounded in the hip, which left him lame for the rest of his life. His first wife, Lorette May Thompson, died in 1869. He married Addis Brown Reade in 1872, one year after returning home to Livermore to care for his aging father. Samuel had five children."

J. H. Decoster, who mailed the card was a town treasurer and postmaster for Mechanic Falls, Maine. Even the addressee, Elijah Wadsworth, had a famous son.

What an interesting piece... Check out this listing in my Etsy shop!
Posted by Joanne at 11:28 PM 3 comments:

Angus Walters and the Bluenose, part of Canadian sports history

Welcome to my new blog!

Sometimes my shop sells unusual items with some interesting history.... Here is the first. (It sold as I prepared this. I hope the new owner loves it as much as I do.)

This framed nautical photo I obtained at an estate auction. I knew little about it.

It turns out that this wall hanging is an iconic signed photograph. It depicts the Canadian schooner "Bluenose." Photographed by the venerable John Knickle's studio, the schooner is in full sail... "Bluenose by the wind."

This nautical wall hanging is a piece of history. According to Wikipedia, the "Bluenose was a fishing and racing gaff rig schooner built in 1921 in Nova Scotia, Canada. A celebrated racing ship and fishing vessel, Bluenose under the command of Angus Walters became a provincial icon for Nova Scotia and an important Canadian symbol in the 1930's, serving as a working vessel until she was wrecked in 1946."

The Bluenose has been celebrated by three Canadian postage stamps, the Canadian dime, even Nova Scotia's license plate. More information about the iconic schooner Bluenose. Here is yet more history about the Bluenose.

This particular photograph has a larger space on the bottom. It was inscribed “to Harold and Juanita, Angus J Walters, Master Bluenose" "August 29, '55." Here is Angus Walters' biography.

Canada's Sports Hall of Fame held its opening ceremonies on August 24, 1955. Bluenose and her captain, Angus Walters, were inducted into the newly inaugurated Canadian Sports Hall of Fame at that time... This photo is dated August 29, 1955, just a few days after the official hall of fame opened.

The "Harold and Juanita" are a bit of a mystery. I believe that this was a presentation piece from Angus Walters to the man who was instrumental in starting Canada's sports hall of fame. He was known as Harry Price.

Here is more information about Harry I Price's contribution to the Canadian Sports Hall of Fame. This has some further data about Lieutenant Henry Isaac 'Harry' Price. This is interesting background information about Henry Isaac Price's parents and childhood home in Leslieville. He came from a noted family of brickmakers and the house was a stop on the Underground Railway.

The photograph for sale is signed “J E Knickle" (initials also impressed into bottom right corner).  More about the photographer.

This wall hanging measures 12-3/4" wide by 11-5/8" high. It is in nice previously owned condition with some yellowing to the mat and a couple of dings to the wooden frame. And six brown dots on the bottom left corner of the signed area.

Additional research... Here are some samples of Angus Walters' signature over the years (he was 74 when he signed this piece).

From 1921, the Bluenose documents.

A signed book about the Bluenose that sold.

Joanne
Raised in several states and trained as a professional horticulturist, I have been selling vintage items online since 2005. Please visit my Etsy shop VintageMaineia.